Hello everybody,
once again there is an unsolved mystery, so there is once again time for a blogpost!

This time: The mysterious "always same nonce *bug*" or "100% collision with nocestatistics" 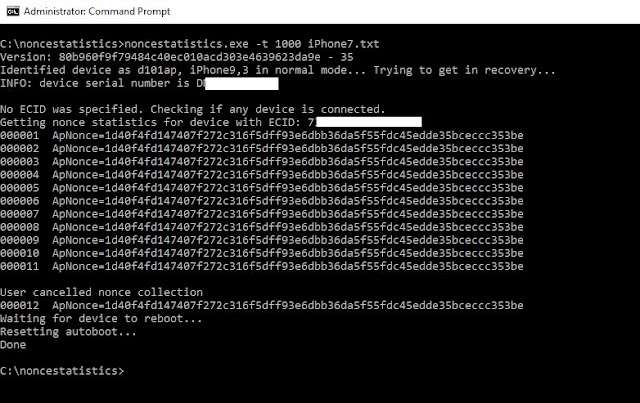 So what's really up with this?
Well i can assure you this is neither a bug in noncestatistics, nor in futurerestore and also not a bug in calc.exe
You might be thinking: why is this apnonce thing, which is supposed to be random, always exactly the same?
I assume this is a bug introduced somewhere in 10.x

But let's take a look at what really happens...
If you've seen my talk at 33c3, you probably know what happens if you request an apnonce in normal mode.
Quick recap:
1) you request an apnonce with iTunes/idevicerestore/on device OTA updater
2)lockdownd (i think it's lockdownd, but don't quote me on that) is responsible for answering the request. So lockdownd asks the kernel "hey i need a nonce".
3) kernel does the following:
3.1) if a nonce hasn't been requested since the device booted, choose a random generator and write it to nvram.
3.2) read generator from nvram and derive a nonce from it
3.3) return that nonce to lockdownd

So here you see, that when you request a nonce twice without rebooting a device, you'll get the exact same nonce in normal mode. If you want it to change (in normal mode), you need to reboot.
So far, so good.
Now when you reboot into recovery (iBoot) two things can happen:
1) a generator does not exist in nvram, then *somehow* choose a random nonce (i'm not 100% sure but i think iBoot randomly chooses a generator and then derives a nonce from that, instead of directly deriving a nonce)
or
2) a generator does exist, then derive a nonce from that generator directly

When you go the second route, the generator is cleared from nvram, so if you reboot into recovery again, you can't get the same nonce twice.
This makes totally sense.
The problem is that for some reason apple fucked this up in iOS 10 (WTF APPLE!?!?! it worked perfectly fine in pre-iOS 10).
So the issue now is, that nvram doesn't get cleared so always the same nonce is derived in recovery.
So if this happens to you, you can verify this by changing the generator.
To do this you can reboot into normalmode and request a nonce. This should make the kernel write a different generator to nvram. If the generator still doesn't get cleared in recovery, then you should at least see a different nonce repeating over and over again.

Can you abuse that for prometheus?
Well, technically you can, because if you request an APTicket for that nonce and get the same on next reboot, you can use that ticket.
The issue here is, that once the nonce changes you'll probably never be able to generate that again (assuming the PRNG isn't horribly broken on post iPhone5s).
So you'd need to avoid requesting an APNonce in normal mode via iTunes (which shouldn't be too big of a problem if you never connect your phone to a computer), but you also need to block the on device OTA updater from requesting a nonce, which might be more of an issue.

This means if you somehow can keep the same generator forever in nvram, you can downgrade iPhone6/iPhone6s and iPhone7 with prometheus without jailbreak. So if you want to look into this, go ahead and share your results with us. (I'd love to see a page on theiphonewiki where people can actively work and share their results about all this)
I personally will not look into this particular bug right now.
Also don't forget that apple introduced this bug with an update and they can easily fix this with another update.

So that's the story with 100% noncecollision. You don't need to worry that noncestatistics, futurerestore or calc.exe might be broken.